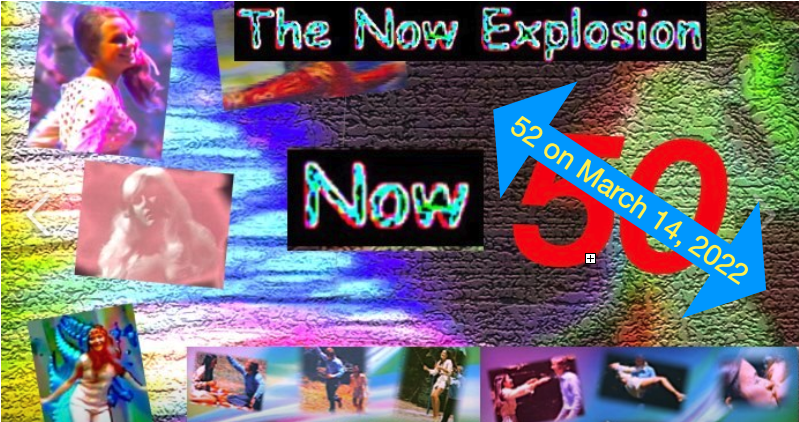 Produced in this Building
1810 Briarcliff Road 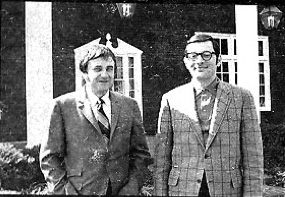 It was unique marathon TV
The show featured locally produced music videos
for hours on end just like top forty
radio - ten years before MTV
Were you around then?
Do you remember?

Click here to see our scrapbook of that Event

If you need to join FaceBook, please
also join the Now Explosion Group

The unusual special effects were made possible
by the Grass Valley video switcher introduced in 1969.
For the first time, video could be switched, faded and blended
rapidly and "played" in real time to the beat ofTop Forty music.
Although never intended by the manufacturer, producers literally
played the switcher like a musical instrument creating
dazzling visual effects never before seen on TV. 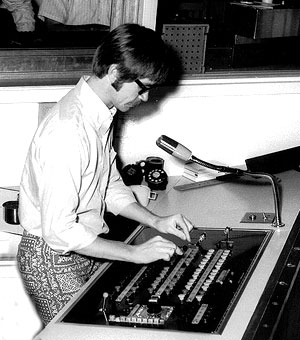 Read our mail by clicking here.

Below are a some images from the Now Explosion Pilot in 1968-70 at the following facilities:
WFAA-TV, Dallas, TX, WHBQ-TV, Memphis, TN, WKBS-TV, Philadelphia, PA KMBC-TV, Kansas City, MO,
and from 16 mm film shot in Philadelphia, Dallas and Atlantic City (shoreline). New Jersey

Below is an excerpt from letter by Now Explosion producer Bob Whitney to Atlanta Journal-Constitution Radio TV Reporter, Miriam Longino, November 4, 2000 about The Now Explosion TV show produced in Atlanta in 1970. This letter followed an AJC feature article by Ms. Longino, August 3, 2000. Later the AJC published a followup article about a March 2001 reunion in Atlanta where some Now Explosion survivors celebrated and produced an archival video.

(Excerpt).....Atlanta energy and creativity did indeed launch the music video genre a full decade before MTV. The special effects that were the program's hallmark were not always easy to come by and continual invention was basic to the program's popularity.

Special effects previously unknown in video production were invented. The moving image of an individual dancer (below on the right) was created by running expensive two inch videotape that had just been recorded onto the control room floor. We - guided the moving tape - while still being recorded - across the room to be played back on a second machine seconds later. The image from the second machine was then combined ("keyed") with new images from the first machine. One camera, one dancer! Click the Image to see the video.

Strangely redundant effect - never before seen - seemed to create many dancers out of one in an eerie montage which made the dancers seem to grow new bodies while they danced to top forty hits. Such things are simple today with digital video equipment but were off-the-wall inventions in 1970. (Or would it be off-the-floor inventions.) You can imagine what the traditional channel 36 employees thought when they saw videotape running along their less than spotless floor from machine to machine.

Nowadays - you can do all of this stuff on your Laptop computer.
But in 1970 we needed 3 of these monster videotape machines
to do simple video editing.
Three mashines? Close to a million dollars!
Just the tapes alone, about $300 per hour.
(No wonder we went belly-up!)
We had to keep erasing tapes - to make new tapes!
We had thought they were all erased and lost forever!!

But After more than three decades a few old tapes were discovered in
a south Florida garage...by a University interested
in rescuing cultural artifacts.
We were the artifacts and the
University of Georgia found us somehow...

Original Video of The Now Explosion produced in Atlanta, GA, in 1970, has been recovered by
video archivists at the University of Georgia. Program segments stored in south
Florida for 3 1/2 decades have been remastered by the archive to
contemporary technical standards and digital media.
It's a bit of a miracle - but now - we've
actually got some of
that video! 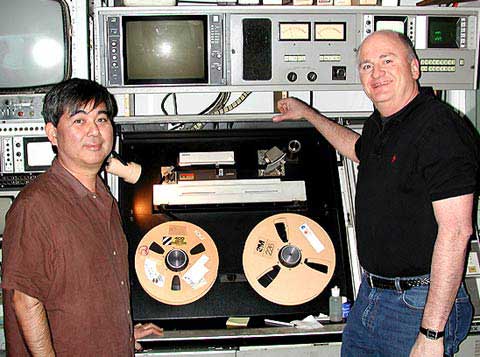 Below are some members of the original Now Explosion crew at
WATL Atlanta - TV (CH 36) in March, 1970 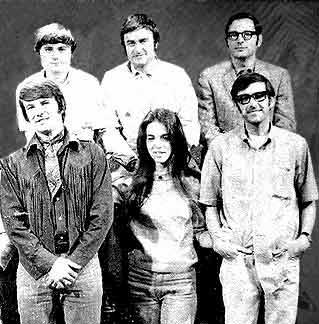 New staff gets ready for first full weekend of The Now Explosion
on WATL-TV in Atlanta, March 14, 1970. Shown in front are Atlanta
Director Steve Rash, Associate Director Maggie Spadafora (later to
become Mrs. Steve Rash), Now Explosion Creator-Producer
Bob Whitney and Administrative Associate Debra Miller.
In the rear are the world's first tele-jockies (we called 'em VeeJays)
Skinny Bobby Harper and Bob Todd (Thurgaland.) (See below.)
John Prager, Editing Manager, is on the right.
________
The Now Explosion ran every hour, all weekend
and these VeeJays were worn to a frazzel for sure!

Skinny Bobby Harper and Bob Todd - on the air - 1970
In 1970, Harper made a video and talked about
The Now Explosion. 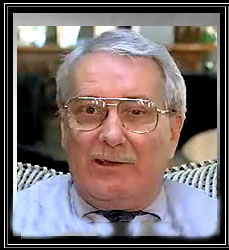 Go to YouTube to watch the Bob Harper Interview 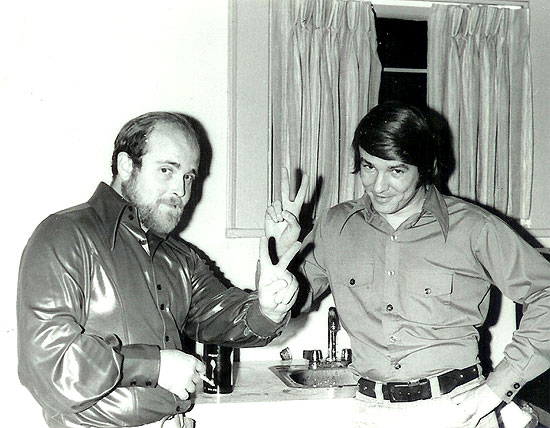 The Now Explosion spent 13 weeks at Channel 36 in Atlanta.
The VeeJays were not seen on the video, but worked
from a control room adjacent
to the main studio. 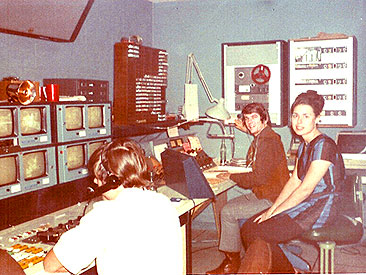 With Bob Todd is his wife, Jodie.
Director Steve Rash is
in the foregound.
Photo courtesy Bob Todd 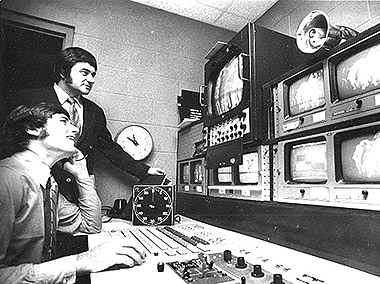 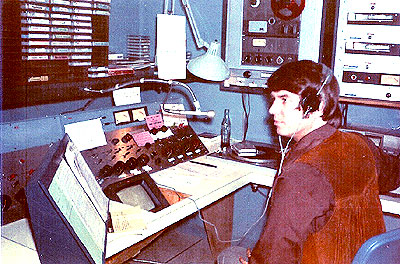 Now Explosion TeleJockey, Bob Todd
"It was a radio show, really. Except you knew the audience was
watching something...instead of just listening ...so,.. ofcourse, you
had something to say about what everybody was looking at as
well something about the artist, or the lyrics and the music.
We kind of had to get used to doing a
top forty show with pictures." 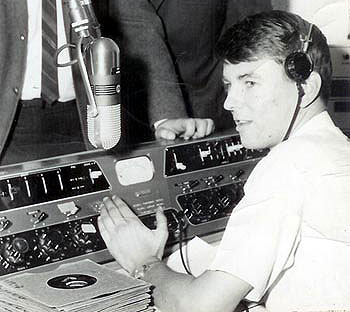 "Eventually - when I cut my hair and went back to just plain radio - well -
something was missing, you know what I mean?" 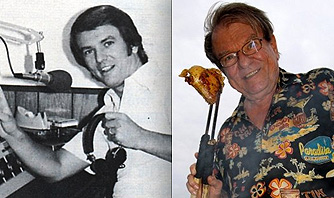 After 13 weeks The Now Explosion moved
to Ted Turner's Channel 17 in Atlanta.
Turner Director R.T. Williams became it's new director
and the production operation was moved to
Ft. Lauderdale, Florida

Click here for a memory from
Ted Turner's Director of Broadcasting, Al Smith
back in good old 1970

The Now Explosion was one of the first business ventures
of the foremost radio broadcast company, Entercom. 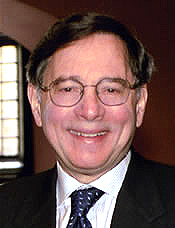 Also added as featured VeeJay was South Florida radio Legend
Rick Shaw - one of the first Top forty radio jocks at
WQAM in Miami in the late Fifties. Rick was
still on the radio playing those very
same songs at Majik 102.9
in Miami until 2007.
National syndication began. First subscribing station was WPIX-TV, New York. 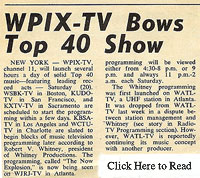 Stations followed quickly in Washington, San Francisco and Sacramento.
Program tapes were assembled at VideoTape Associates in
Ft. Lauderdale from video and film shot at
Miami Teleproductions in Miami and
were duplicated at Turner's
Channel 17 in
Atlanta.


Read our mail by clicking here

Miriam Longino, radio-tv reporter for the Atlanta Journal constitution in 2001,
researched the background and history of The Now Explosion and wrote two
feature articles on the historic TV show. In a 9 minute interview, she
recounts her efforts and experience in telling this story
Click here to listen to Miriam's story (9:00 min)
Skinny Bobby Harper and Bob Todd (above) were the world's first two VeeJays
(video disc jockeys). In an interview on March 27, 2001, Bob Harper
recorded his memories of The Now Explosion back in 1970.
Bob Harper passed away on July 22, 2003.
Click here to listen to Skinny Bobby's story (7:30 min)
Bob Todd had a few remarks about the Now Explosion on OurRadioShow which
originated at KTK in Ocala, Florida, several years ago. Whitney was a guest on the show. 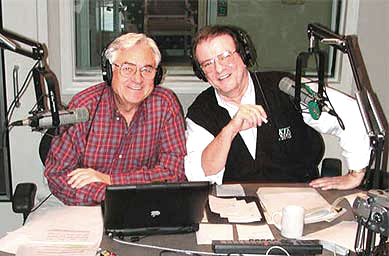 Send us E-Mail to HiThere@TheNowExplosion.net
If you are wondering what's left
after all these years, Click Here !
Publicity and Promotion in 1969 - 1970